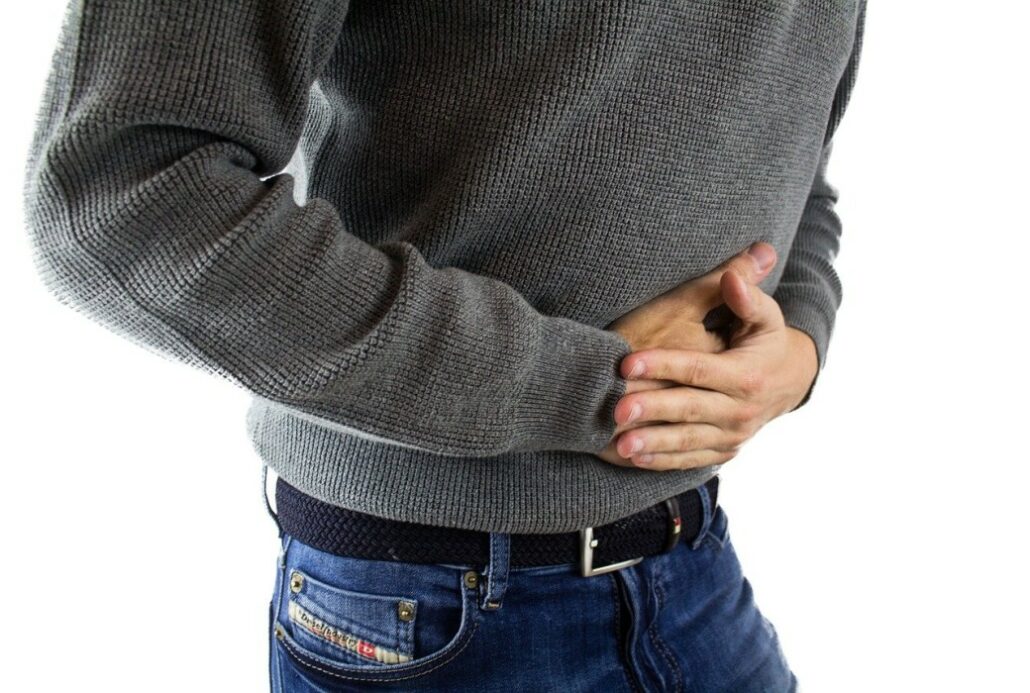 Can A Bulging Disc Cause Abdominal Pain?

There are many possible causes of abdominal pain. Some of them are serious and others are only a passing discomfort. But, on rare occasions, a bulging disc may be the culprit.

It’s rare to have a bulging disc causing abdominal pain, but it’s possible. When this happens, it’s typically due to a herniated disc in the upper back, also known as the thoracic spine. When the disc bulges laterally, or sideways, it can cause abdominal pain, among other symptoms.

The thoracic spine is the area between the base of the neck and the lower back. Since this section of the spine is surrounded and stabilized by the ribcage, most people don’t experience disc herniation there. It is much more common for people to have a herniated disc in the low back or the neck, since both those areas see a lot of movement and are generally less stable than the thoracic spine.

But that doesn’t mean thoracic disc herniation is not possible. It does happen, and when it happens, a large enough herniated disc can often cause abdominal pain. Since it’s such a rarity, many physicians don’t immediately think of it when a patient presents with pain in the abdomen. This generally leads to unnecessary and often expensive tests to try and find the problem.

Of course, it’s not the only cause of pain in the abdomen. It often is accompanied by pain in the mid-back and the chest wall.

It takes a special kind of disc herniation to cause pain in the abdomen. This is known as a lateral disc herniation. When a disc bulges laterally, or sideways, in the thoracic spine, it can press on and irritate the nerve root branching out from the spine. This is what causes someone to feel pain in their abdomen.

Luckily, most people find natural pain relief for a herniated disc in this area. Of course, this depends on the cause of the herniation.

Most thoracic disc herniations are caused by trauma to the upper back, such as a fall, car accident, or a sports injury. But, they can also be caused by degenerative disc disease, such as arthritis. When this happens, it can cause the calcification of the discs, which may call for invasive treatment.

Simple things like reaching up to grab something or twisting (like when putting on a seatbelt) can cause the pain to become worse.

Most thoracic disc herniations occur in younger people as a result of trauma to the area. Those that have degenerative disc disease often seek treatment between the age of 40 and 60, but they usually have been dealing with pain and related symptoms for some time before they decide to seek treatment.

Women also seem to be more affected by thoracic disc herniation causing abdominal pain. One study suggested women were affected more than men by as much as four to one.

Most people’s first question about any kind of disc herniation is usually, “Can it heal without surgery?” The answer, for most people, is yes. Those rare few with unbearable pain or paralysis may need to consider surgery before other treatments, but for most others, conservative treatments are the way to go.

Since the thoracic spine is surrounded by rib bones, surgery is often risky and best avoided. The best treatment options involve:

For most, the long-term effects of a disc herniation are nothing to worry about when proper treatment is sought.

Now, we’ll answer some other common questions about disc herniations that may cause abdominal issues. 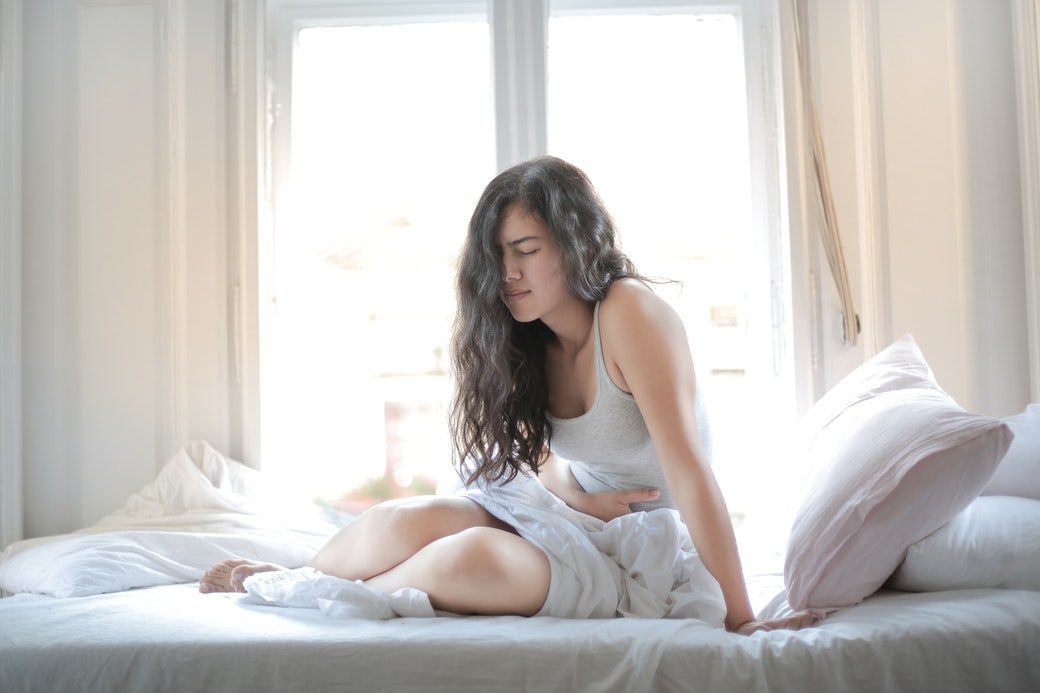 Can A Bulging Disc Cause Digestive Problems?

There is currently limited scientific and peer-reviewed information that shows a direct link between a bulging or herniated disc and digestive problems. However, there are studies that suggest this is the case. One such study found that 50% of the patients presenting with herniated discs complained of digestive problems, including irritable bowel syndrome.

Granted, the study was small, but it was enough for the authors to suggest that more studies should be done on the connection between digestive issues and disc herniation.

Bloating and digestive problems often go hand in hand. Knowing this, you may not be surprised to find that herniated discs can also cause bloating as well as abdominal pain and back pain. But, the two are not always related. In fact, bloating and other digestive issues can cause back and abdominal pain.

Most of the time the pain and bloating will go away after a bowel movement or as time passes. But it’s important to see a medical professional if the problems persist more than a few days.

Can a Herniated Disc Cause Gas?

If you’re experiencing back pain, abdominal pain, and digestive issues, you may be wondering when to seek treatment, and what kind of treatment is best.

When to Seek Treatment

If you’re experiencing paralysis, numbness, an inability to control your bowels, or unbearable pain you should seek immediate medical treatment. If, however, your symptoms come and go or they haven’t been present for more than a couple of days, you may want to wait and see if they go away on their own.

When it’s time to seek treatment, chiropractic care is a good option. Chiropractors specialize in spinal care. They approach any issue with the entire body in mind. They understand that the nervous system, which travels through the spinal column, can cause all kinds of issues throughout the body. This includes abdominal pain and digestive issues.

They can also relieve pain, assign exercises, help with nutrition tips, and even talk to you about the best sleeping position to avoid pain at night. They use many different techniques to treat disc herniations. Some of these include:

More from my site 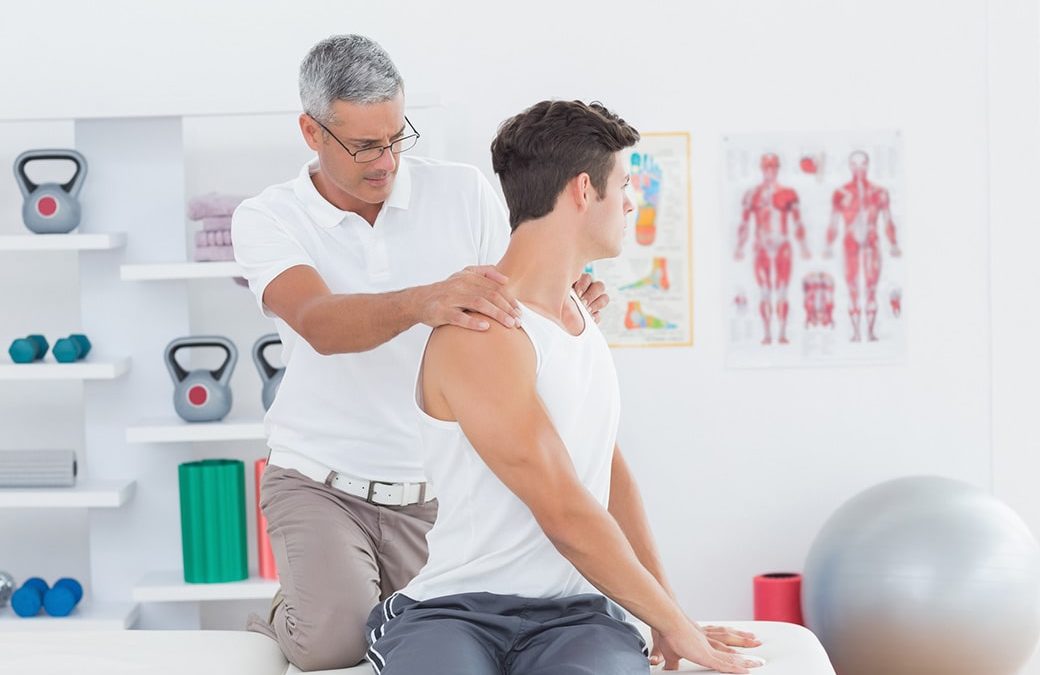 What To Do (And Not Do) After a Chiropractic Adjustment? 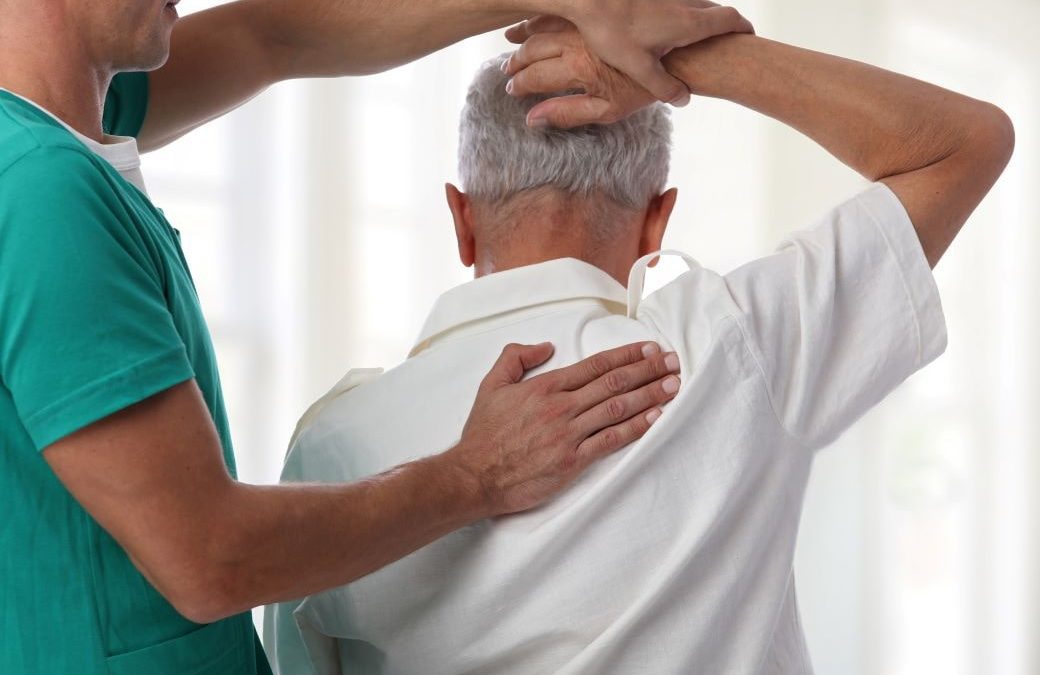 Causes and Treatment for Thoracic Spondylosis 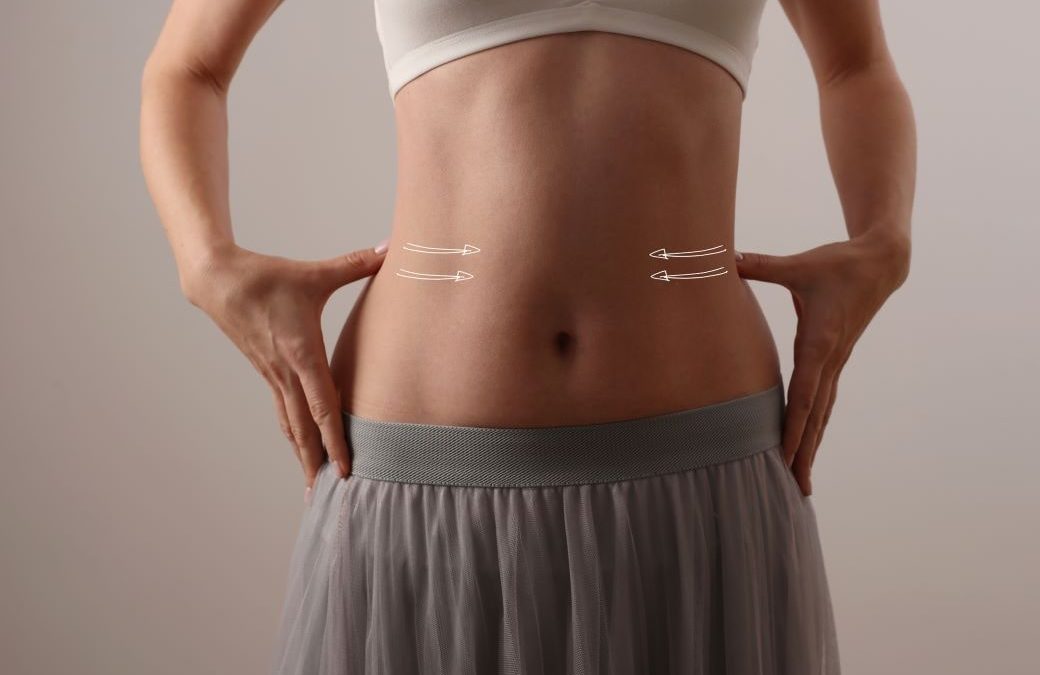 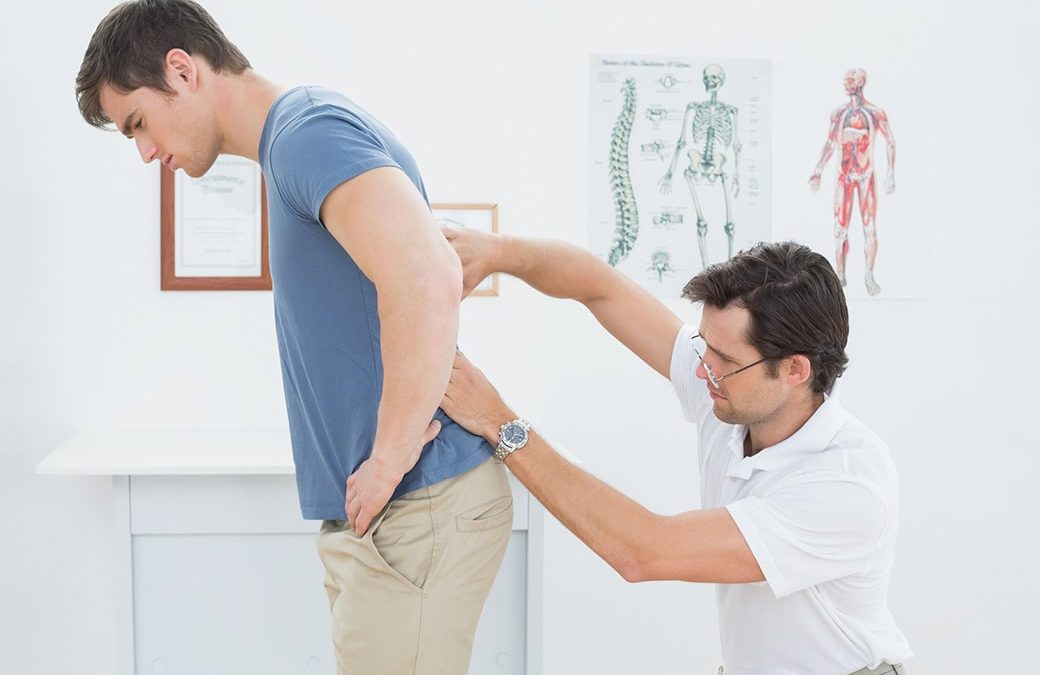 Do I Need a Doctor’s Referral to See a Chiropractor? 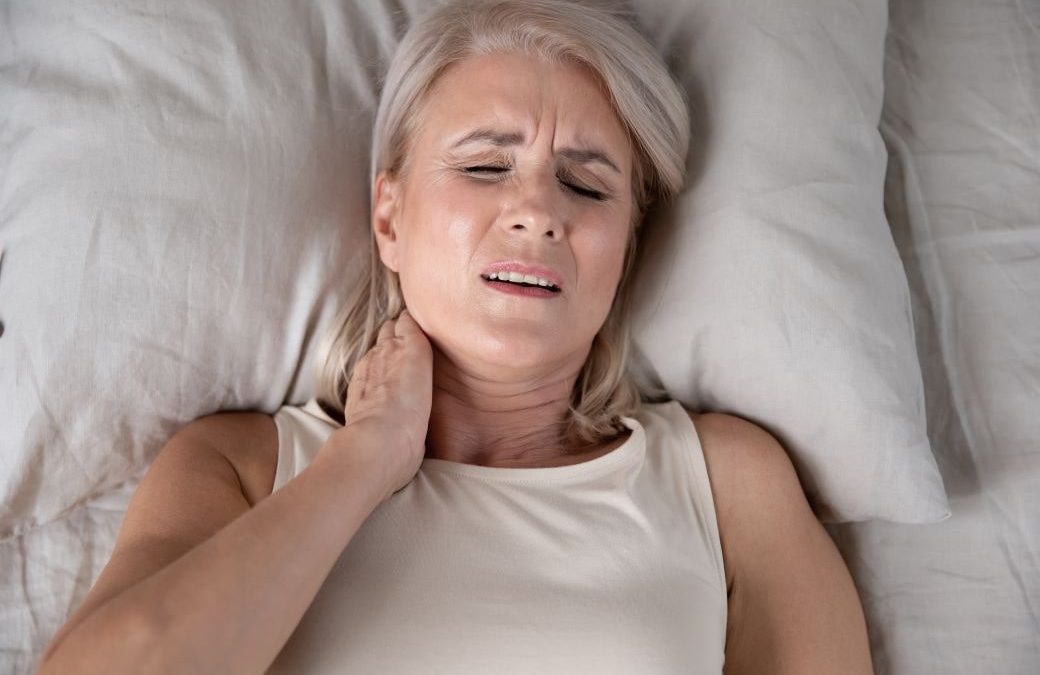 How to Get a Good Night’s Sleep With Whiplash? 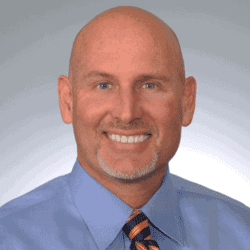 How Long Does a Chiropractic Adjustment Last?

Chiropractic adjustments are a mystery to many people. For most, it’s a matter of getting rid of the pain their back or neck is causing. But many people wonder how long that pain relief is expected to last. In other words, they want to know how long a chiropractic...

Signs Your Pinched Nerve is Healing

Pinched nerves are no fun. If you’ve ever had one (or you think you have one now), you know just how bad they can be. Sometimes the pain is persistent. Other times it’s intermittent. Either way, you’ll want to know whether it’s getting better or worse. And the best...

How to Get to Sleep (And Stay Asleep) With a Bulging Disc?

Sleeping with a bulging disc can be tricky, especially since we’re creatures of habit. Unfortunately, sleeping in the wrong position (even if it’s your favorite position) can add stress to your spine, making the bulging disc worse, which can cause strange symptoms...

Does a Herniated Disc Make You Shorter? The Truth

It’s common knowledge that we tend to shrink as we get older. The cause of that minor shrinkage is similar to what happens when we suffer from a herniated disc. And while getting older or having a herniated disc won’t drastically change your height, it can cause...

Prescription medications have their uses. Many people are used to seeing a general practitioner and walking away with a prescription for some kind of medication. And since there’s still some confusion about what chiropractors do, many people wonder if these medical...

We used to think that sleep wasn’t such a big deal. It was (and still is) “cool” to operate on only 5 or 6 hours of sleep per night. You hear entrepreneurs and successful executives talking about how they don’t sleep much because they have too much to do. And...